Evacuation of the city of Pripyat 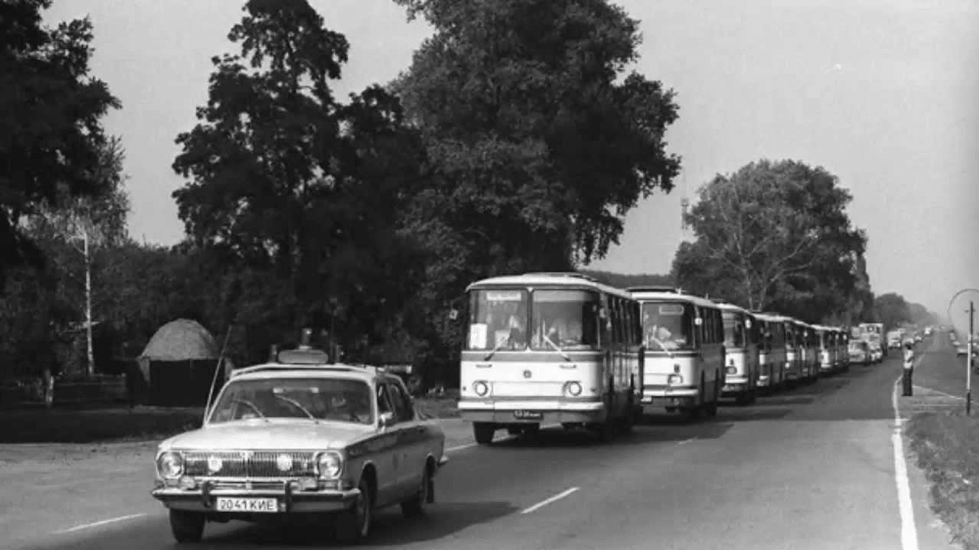 After the accident at the Chernobyl nuclear power plant on April 26, 1986, due to high levels of radiation, residents of nearby settlements were evacuated. One of the first was the city of Pripyat, which was located three kilometers from the epicenter of the tragedy, and with a population of almost 50 thousand inhabitants.

On the night of April 26-27, a convoy of buses (about 1200 units) arrived from Kiev and adjacent regions to the outskirts of Chernobyl.

On the morning of April 27, it was decided to evacuate the city in the afternoon.

On April 27 at 13:10, on the local radio, the townspeople were informed about the evacuation of the city.

Attention, dear comrades! The city council of people's deputies reports that in connection with the accident at the Chernobyl nuclear power plant, an unfavorable radiation situation is developing in the city of Pripyat. The necessary measures are being taken by Party and Soviet bodies and military units. However, in order to ensure the complete safety of people, and, first of all, children, it becomes necessary to temporarily evacuate the city's residents to the nearest settlements in the Kiev region. To do this, today, on the twenty-seventh of April, starting from fourteen zero-zero hours, buses will be served to each residential building, accompanied by police officers and representatives of the city executive committee.

It is recommended to take with you documents, essential things, as well as, in the first case, food. The heads of enterprises and institutions have determined a circle of employees who remain in place to ensure the normal functioning of the city's enterprises. All residential buildings for the period of evacuation will be guarded by police officers. Comrades, when leaving your home temporarily, please do not forget to close the windows, turn off the electrical and gas appliances, and turn off the water taps. We ask you to keep calm, orderliness and order during the temporary evacuation.

At 13:50, a gathering of residents near the houses was organized, and already at 14:00, buses were delivered to the gathering places. Pripyat was evacuated in almost a few hours.

After 18:00, police officers bypassed the city, where 20 people were identified who were trying to hide from the evacuation.

The evacuation of the population itself took place calmly, without panic, only those who performed their official duties remained in the city - the military, liquidators, workers of public utilities and other services, members of the Government Commission, task forces of various ministries and departments.

On April 28, the Government Commission, operational groups and headquarters were relocated from the city of Pripyat to the city of Chernobyl.

Tourism in the Chernobyl Zone