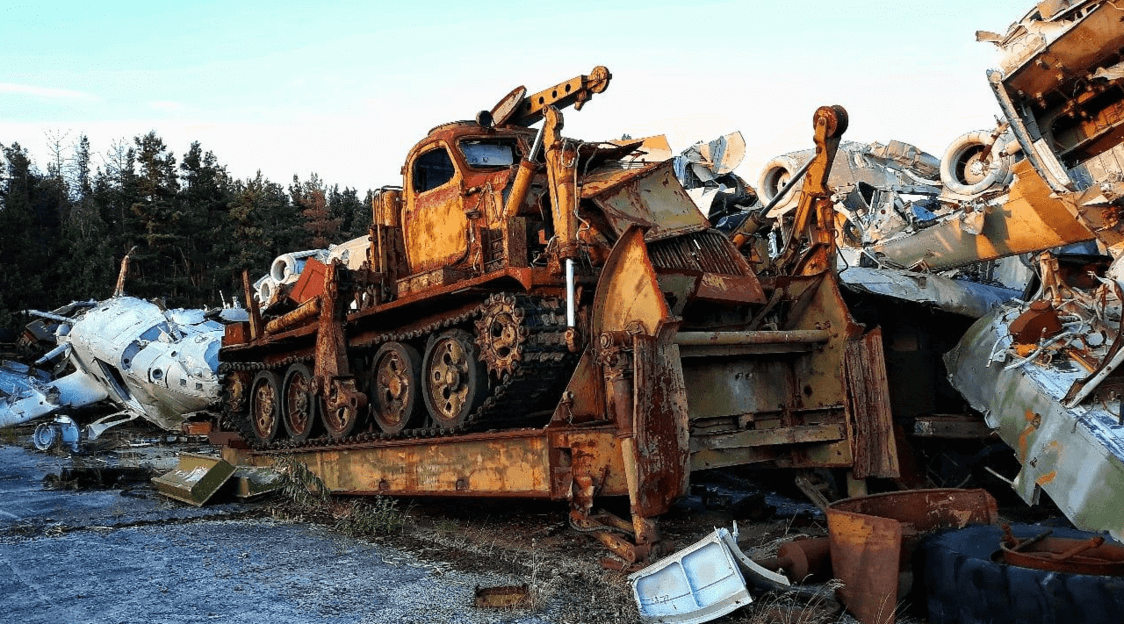 The territory of the exclusion zone that arose after the terrible accident at the fourth power unit of the Chernobyl nuclear power plant includes places that deserve increased attention and detailed consideration. The village of Buryakovka is a place whose main feature is the "burial ground" of radioactive equipment.

In Soviet times, the village of Buryakovka was a small settlement in the Ivankovsky district of the Kiev region. It was located 50 kilometers from Chernobyl itself in the 80s, 226 people lived there. After the accident, he faced the same fate as other villages in the adjacent strip. The village was deserted, and local residents were relocated to the neighboring Makarovsky district. After the elimination of the main problems looming over the government, a burial ground for equipment was laid in the south of the village, which was irradiated with radioactive particles. RWDF (radioactive waste disposal site) was located 4 km from the settlement. The RWDF was based on the design drawings of surface storage facilities for radioactive substances of the first group. The RWDF began to operate in February 1987. Its dimensions are 1200 * 700 meters. Consists of 30 trenches, each with an area of ​​20 to 25,000 square meters. In 1999, the village was officially removed from the list of settlements.

All infected equipment was classified according to the level of infection. Therefore, when it entered Buryakivki, it was buried in the soil to a depth in accordance with the state of contamination with radioactive elements. The most acceptable part for storage in this storage is considered to be contaminated up to 30 mc / h. According to experts, the half-life of such an contaminated part will last up to 300 years.

Buryakovka was chosen for a burial ground for a reason. This was influenced by: the geological and hydrological possibility of trapping radioactive elements, remoteness from water bodies, settlements and industrial production, stable geological processes of the place.

The warehouse stopped accepting infected equipment in 1996 when the volumes of its contents dried up. In total, 1,330,500 tons (665.25 thousand m3) of radioactive waste of Chernobyl origin have been delivered there since the beginning of the operation. The main engineering barrier ensuring the localization of radionuclides is a specially created clay shield 1 meter thick.

The equipment that was used to eliminate the consequences of the accident directly at the Chernobyl nuclear power plant and adjacent territories is preserved at a separate site of the RWDF. Among the interesting "exhibits": An engineering vehicle that was used to clear the debris at the fourth power unit and destroy houses in the exclusion zone, the remains of a radio-controlled robot that worked on the roof of the fourth unit of the Chernobyl nuclear power plant, a large number of trucks and cars that paved the way. In 2012, one Ukrainian enterprise reached an agreement with the State Atomic Directorate to dismantle and fragment contaminated equipment.

In recent years, negotiations have been actively conducted regarding its reorganization, which could provide additional storage space for another 120,000 cubic meters of radioactive waste.

The center's workers also study “the transformation of urbanized ecosystems under the influence of accident factors”, in other words, they look at the example of the city of Pripyat as a settlement changes due to radiation pollution due to an accident or a terrorist act.

read more
CHERNOBYL TAP WATER: TO DRINK OR NOT TO DRINK?