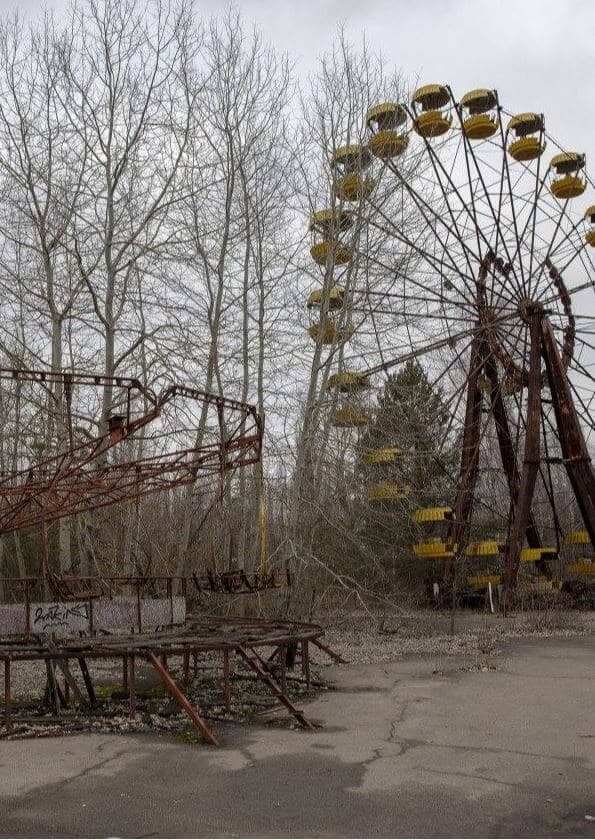 The entertainment park was to be opened in the young and developing city of Pripyat on the occasion of May Day on the first of May. All rides were constructed and checked and waited for an opening. 5 days before the celebration, on April 26, 1986, the explosion thundered and the park was never to see its visitors.

It is located in the center of the city, beyond the department store, hall of culture ‘Energetik’, and hotel ‘Polesie’. The Chernobyl Eye (big wheel) as one of the main city landmarks also stands here.

The legend has it that the Eye had never been used. However, there is a photo proof that the Eye operated, at least in the course of prior testing. In 2017, one strange video blew the internet: the tourists from Poland launched the Wheel, but still, nobody knows how it happened. According to the video maker, no electricity means were used for its launch.

After 30 years of stagnation, it is highly dangerous to launch it. Besides, one of the cabins of the Wheel is extremely radioactive. The trench gate in the center of the park indicates a high level of radiation as well. The matter is that in 1986 one of the helicopters, engaged into fire-fighting operations at the reactor, was cleaned here. Water ran into the sewerage system through the trench gate, thus it emits radiation.

Apart from the Wheel in the park, there are also swingboats, merry-go-rounds, and a motor-racing track. The place began to grow trees and the abandoned rides became rusty. The photo on the back of the park is a must when you visit the Zone. You may choose among our tours to see this stunning and legendary place.