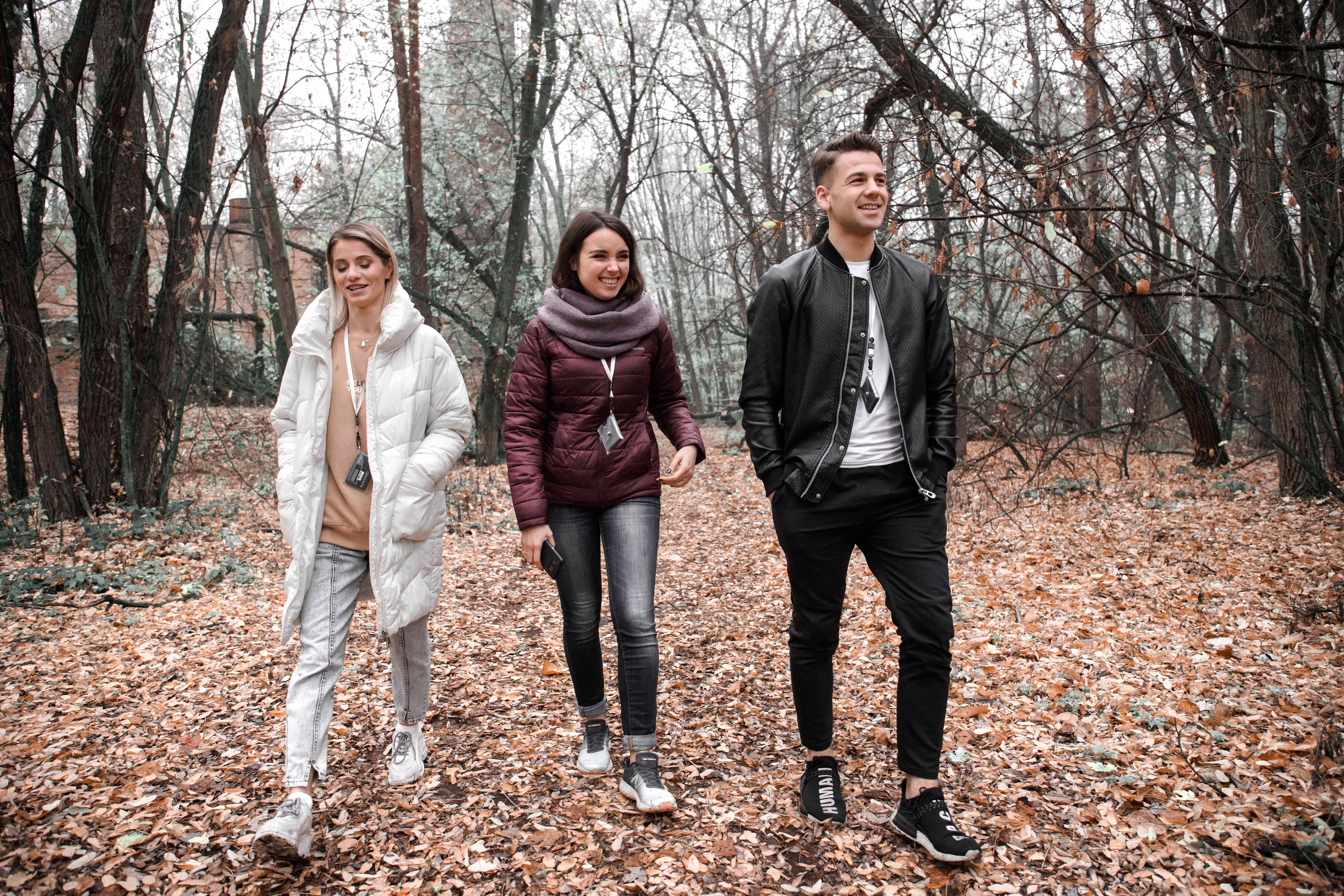 Tour for a fixed date, with a fixed itinerary and open enrollment. For a group tour, the meeting point is Kiev, Shulyavska street 5 (Polytechnic Institute metro station), group gathering at 7.30 am, departure 08:00 - 08:20.

In case of delay, the tour starts without a participant, the prepayment is not refundable. The route of the group will correspond to the program of the route. After the tour, return to the collection point (start) around 19:00 - 20:00 pm (depending on traffic). The cost of group tours is fixed, depending on citizenship, and additional options (set lunch, dosimeter rental, souvenirs). Included in the price: transfer, insurance, a full package of documents allowing a visit to the Exclusion Zone, guide services.

Tour language - Ukrainian, Russian or English. Meals - cafe "Desyatka", which is located in the city of Chernobyl. The transfer is carried out by minibuses Mercedes Vito, Ford Transit, Mercedes Sprinter. During the season, especially on weekends, the group can reach up to 55 people, the group is accompanied by two guides, at some locations there is a division of groups.

Departure from Kiev (the road to the checkpoint will take about two hours).

Technical stop at the checkpoint "Dityatki" (checking passport control by police officers). Next stop Chernobyl: at the entrance stop at the stele. Travel around the city of Chernobyl, city center, stop at the park of the memorial "Star-wormwood". After, a monument to the liquidators (Those who saved the world). Exposition of robotics - equipment of the liquidators, robots that worked on the roof of the Chernobyl nuclear power plant.

Tour for any date and day of the week. You can order both a one-day tour and a multi-day tour with an overnight stay in a hotel in the city of Chernobyl. The route is developed and approved at the request of the customer. The choice of transport is provided from 3-seater sedans to buses with 50 seats. Accompaniment of the group is possible in Ukrainian, Russian, English, Polish, French, German, Spanish and other available languages.

The time and place of departure is negotiated individually within Kiev. It is recommended to leave 08:00 - 09:00 am to see as many locations as possible. If you need to pick up outside Kiev - an additional fee, depends on the place. Drop-offs are also optional. There is a transfer service from/to Boryspil Airport. Included in the price: transfer Kiev - Chernobyl - Kiev, insurance, dosimeter, lunch, a full package of documents allowing visiting the Exclusion Zone, guide services.

Two-day trip with an overnight stay in Chernobyl

This tour format is more intense, ideal for those who have already been to the Chernobyl Zone at least once and are ready to expand their horizons and plunge into the post-apocalyptic world in more detail. A multi-day tour allows you to visit more places, see objects that are not available as part of a one-day tour. For example, you can visit the Skazochny pioneer camp, where Chernobyl personnel were evacuated at the end of April 1986.

In the city of Chernobyl, there is an opportunity to get acquainted in more detail with the abandoned private sector, the cemetery of ships and barges, visit St. the city of Chernobyl-2, residential and technical part, see abandoned villages. In Pripyat, you can visit more locations, such as: a hospital complex, a yacht club, city microdistricts, kindergartens, schools, a fire station, a police station and other interesting objects.

Here we give the opportunity, together with the guide, to choose a route so that your ideas and wishes are included. Overnight accommodation is provided in one of the hotels in the city of Chernobyl, that is, during the tour you will not have to leave the Chernobyl zone. Meals are provided in the cafe "Desyatka", with environmentally friendly products.

Included in the price: transfer, insurance, accommodation, a full package of documents allowing a visit to the Exclusion Zone and guide services. Lunch and dosimeter rental are paid separately (in the case of a two-day group tour).

Also, in this format, it is possible to order an individual (private) tour and, in addition to the main attractions, visit the city of nuclear scientists Slavutich, ride the Slavutich-Chernobyl electric train, which carries station personnel every day, visit the Chernobyl nuclear power plant itself, visit the very heart of the block, and also explore block reactor control panel.