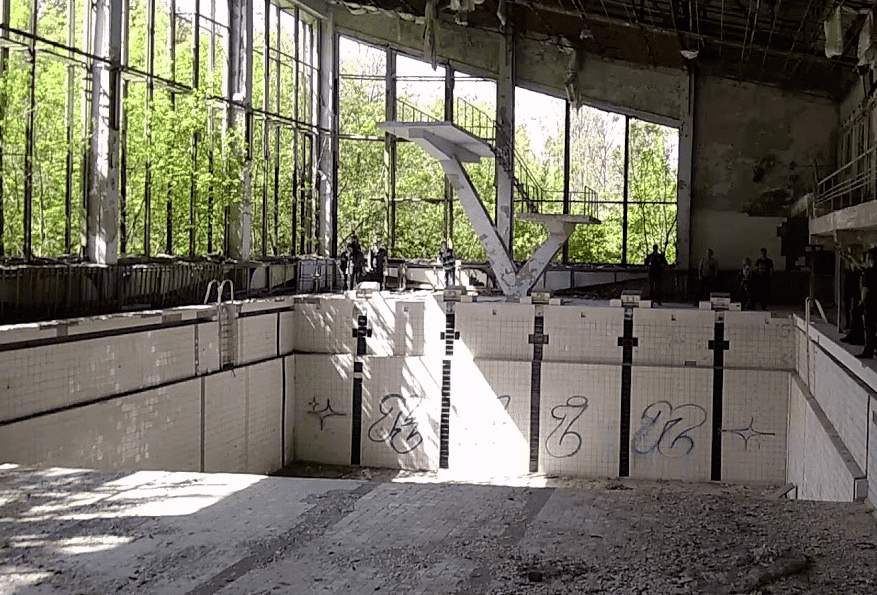 Before the Chernobyl accident, Pripyat was a young settlement that was rapidly developing. In the city, as well as on the territory of the entire Soviet Union, the authorities encouraged the development of sports, so many sport complexes, clubs and swimming pools were opened. The three best swimming pools in the city of Pripyat included an indoor sports complex called "Azure". The complex consisted of a swimming pool, which was designed for five swimming lanes and two diving towers, a sports gym, including a basketball court.

It was opened in 1970 and has often hosted swimming competitions. Lazurny is located in the 3rd micro district of Pripyat on the Sportivnaya Street 18. Its story would seem ordinary if not for one of its peculiarities. The pool has not been closed since a terrible accident in 1986. It has worked for another twelve years, while receiving visitors. They were employees of the administration of the exclusion zone and liquidators who came there to rest. This was due to the fact that the pool was located in a relatively safe area from radiation. One of the interesting facts about the pool is that the clock, which is above the water, shows the approximate date of the accident at the power plant. Immediately after the accident, local authorities stopped supplying electricity and water to various facilities in the city, however, the supply resumed to different facilities in which government officials worked, including to Lazurny. On one of the walls there is a graffiti of the word "rain", as a memory of the fact that there was once water there.

In 1998, the pool was closed due to the shutdown of the third reactor and the complete shutdown of hot water in the city. Today, like all other objects of the exclusion zone, it remains abandoned. On the example of the pool Lazurny, one can easily trace the activity of marauders in the city, because in a relatively short time, for the place in which time stopped altogether, at first most of the metal objects were stolen from it, and then the illegal dismantling of wooden elements began. Despite being in a rather poor condition, this does not prevent the Lazurny pool from attracting tourists from different parts of the world.

Enterprises of the Chernobyl Exclusion Zone