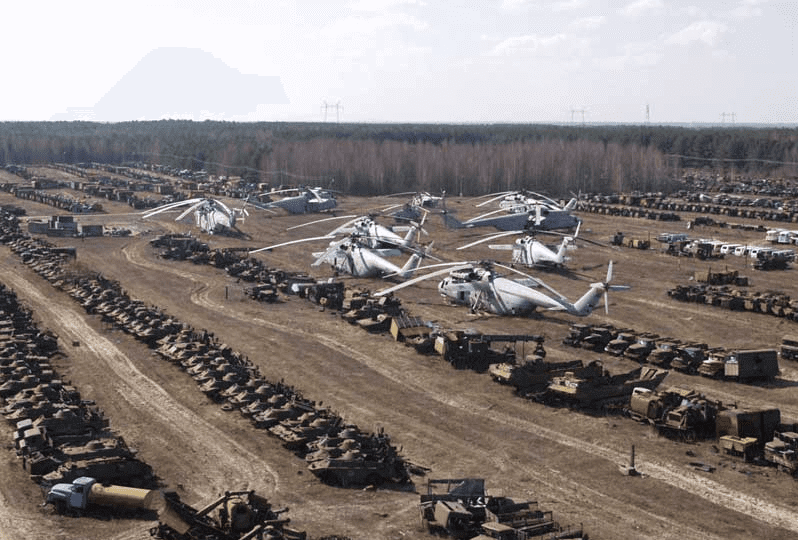 It is a well-known fact that a huge amount of equipment took part in the elimination of the accident. All sorts of machines were involved in the work, from ordinary buses to robotic systems. It was necessary to clean the equipment from radiation dust and pollution after some time, but in the end, so much radioactive substances accumulated in the metal that further, not even a short-term stay in the cabin of such a tractor or crane became impossible.

Therefore, the burial ground became the last refuge for this technique. Some of the machines were buried in the ground, but thousands of units were involved in the elimination of the accident, and it was expensive to bury everything in the ground. Therefore, it was decided to make sites for the storage of radioactive equipment. The largest and most famous among them is located near the village of Rossokha.

Cemetery "Rassokha" is located on the outskirts of the Chernobyl zone, near the village of the same name Rossokha. Before the accident, 416 inhabitants lived here. And after the accident they were evacuated to the village of Kolonshchina, Makarovsky district. The radiation level on the first days exceeded the norm by 800 times.

As for the radiation level at the moment, it is not high. But several PTSs and a couple of armored personnel carriers emit about 20-60 thousand microR per hour. It's all about the “dirty” tracks, which were never washed after the accident. Actually, for this reason, the technique is here.

The legendary helicopters immediately found their last refuge, from which sand, lead and dolomite were dropped onto the destroyed reactor, fire trucks, buses and other equipment were forever frozen here. Especially worth noting is military equipment, which was used most intensively in the year after the accident. IN

A few words deserve the legendary clearing vehicles (IMR-2), assembled on the basis of the T-72A tank. They were used for radiation reconnaissance around the walls of the damaged reactor, they were used to clean the area of ​​debris scattered by the explosion. These machines helped in the construction of the first, or, as they were called, the pioneer walls of the future Sarcophagus, which gave people the opportunity to come close to the destroyed reactor and start building the Shelter object. From the USSR it was the only machine adapted to work in an area of ​​high radiation pollution.

The area of ​​the Rassokha burial ground is approximately 20 hectares. In addition to automotive equipment, 10 Mi-8 and Mi-26 helicopters were sent here. For several weeks of operation of the helicopters, about 5 thousand tons of various materials were dropped into the collapse of the reactor. However, the coma of stalkers seeking to see the remains of the former arsenal of liquidators, today few people feel reverence for these rusted artifacts.

Tourism and radiation of the Chernobyl Zone

People's interest in the locations of the Chernobyl Zone is comparable only to the fear of radiation exposure. Before going to these abandoned territories, you should figure out how safe such a trip is and how to minimize the effect of radiation on the body.

The history and mysteries of the USSR's top-secret military object "Duga", aka "Russian Woodpecker"